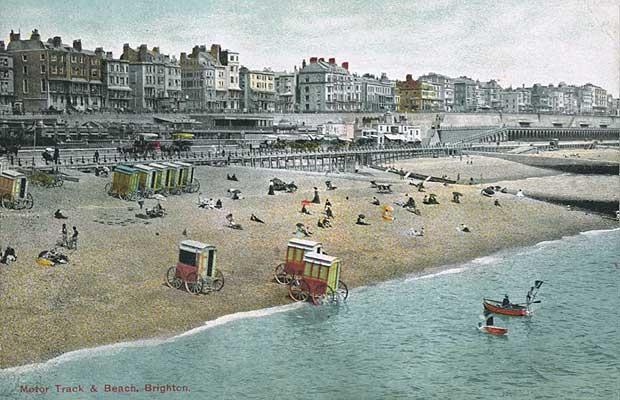 Miranda was on the verge of losing her very short temper. Madam Hamilton's horse-drawn bathing machine was a windowless, airless little hut and Miranda had waited inside over an hour for madam to return from her swim. She gave the wall an exasperated thump and glared at the closed seaside door of the wretched cabin while sweat tricked beneath her starched collar. Her discomfort was all madam's fault. 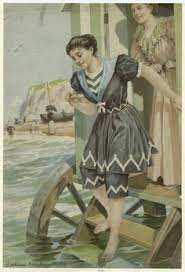 Madam Hamilton had expressed her desire to swim at a distance from shore, "unhampered", she'd said, "by silly women screeching and floundering about next to me." Ever indulgent, the master asked his great friend, the inventor Antonio Pastorini, to install the contraption encasing the doorframe.

A black, many-jointed pipe arched up and over the doorway. Brass tubes wound around the pipe like the coils of a snake. Every so often tiny holes in the tubes puffed out steam with a slight hiss. Mr. Pastorini called it a 'spatial dilation portal' and said it could transport madam as far out into the water as she cared to go. But the door must remain closed while the transportation device was in operation. Hence Miranda's miserable condition.

While Miranda continued to fume and sweat, the hissing sound increased and hot steam belched from the brass coils. Abruptly Madam Hamilton appeared just inside the door, tottering slightly, her pink and white bathing dress dripping.

Miranda muttered something unintelligible and began peeling off her mistress's wet clothes to redress her in her street attire.

Madam Hamilton slipped off a brass wrist circlet and placed it next to the portal.
"Remember", she cautioned Miranda, "This must remain our secret. Mr. Pastorini is not ready to share it with anyone else just yet."

Miranda nodded. "I remember." How could she forget. Madam said it every time she used the portal. It was becoming tiresome.

"I will visit with my friends for a few minutes before we leave for home, Miranda. Remain here and do leave open the door to let in a little ventilation." She wrinkled her nose. "The air is quite offensive."

After Madam Hamilton left, Miranda stared glumly through the open door and listened to the waves lap up against the sides. Madam would be gone at least an hour. How could she bear another minute inside this dreary little hut?

Miranda picked up the wrist circlet and turned it over in her hand. A small dial on the side allowed madam to control the device. She'd heard Mr. Pastorini say the portal acted like a snapped elastic band. The farther away from the portal one was transported, the greater the return force. Madam had mastered the wrist circlet quite quickly. How difficult could it be.

Miranda leaned out of the little hut. She could barely discern madam lounging on a blanket far up the beach with a clutch of women. Slowly she closed the hut door and stepped back inside. Dare she? If she thought about it too much she'd lose her nerve.

Miranda stripped off her clothes and tugged on madam's wet bathing dress. She picked up the wrist circlet and slipped it over her hand. Now, how had madam operated it? The little dial must be moved only slightly. But Miranda couldn't risk being seen by the women on the beach. Madam's bathing dress was unfortunately distinctive and she'd be found out at once.

Taking a deep breath Miranda turned the dial and closed her eyes. She barely heard the hiss of the machine before suddenly being engulfed in waves that slopped up over her face and nose. She coughed and spit then spread out her arms to stay afloat. Treading water, she took her bearings. Sand. People. She was too close to the bleeding beach after all.

Frantically she scoured the shore. It looked different somehow. Wait a minute. There were no women on this beach. She relaxed slightly, seeing bathing machines and horses and umbrellas and heads bobbing in the water. Focusing in on one bather she followed them as they waded for shore. Naked buttocks jounced up and down. The swimmer turned and her mouth dropped open in instant horror. A man. Starkers! Not just any man either, it was the master. And he'd seen her.

In lucky possession of an agile mind, Miranda ducked beneath the waves and jabbed the circlet dial. The next thing she knew she was rocketing across the bathing hut. She hit the far wall with force and slid down to land in a dazed heap. Befuddled, head aching, she put on her own clothes, removed the wrist circlet and sat down to wait, promising herself that if she escaped detection she would never do anything like this again.

That evening Miranda paused beside the dining room on her way to the kitchen and observed the master wink across the table at madam, wag his finger at her and say, "You cheeky thing."


The above was the result of Absolute Write's September Blog Chain prompt - Steampunk/Retro-Future.
I know little about this genre but had fun giving it a go.

My fellow participants are: