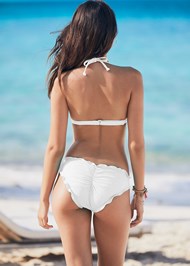 She said she never went to the beach, so why was she standing over me dripping salt water on my don't get it wet 'cause it'll shrink designer bikini?

I looked past her to the water's edge where Kevin waved and started up the beach toward us.

She'd warned me to leave Kevin alone and I'd convinced her I wasn't seeing him any more. She had a vicious temper and she'd kill me once she learned I'd lied.

So I did the only thing I could. I jumped up off my beach towel and sprinted past an open-mouthed Kevin. I hit the surf, knowing my darned bikini would only be fit for a Barbie doll when I came out of the water.

But I was a coward and I left Kevin to face the wrath of his mother on his own.

Book Review of A LONG TIME GONE by Karen White 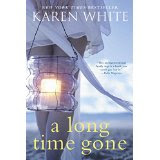 a long time gone is the story of the Walker women of Mississippi. It centers
around present day Walker woman, Vivien, childless and abandoned by her husband, and 1920s Walker woman, Adelaide, Vivien's great grandmother.

﻿﻿
Everyone has their own reasons for choosing a book. I love a mystery and was first attracted to the puzzle found in the back blurb. When an ancient cypress growing toward the rear of Walker property is hit by lightning, the old tree keels over exposing roots with a grisly secret tangled amongst them - the long buried body of an unknown woman. I wanted to find out who she was and why she was buried there. And so I began to read.

I was drawn in by the setting - where it took place and when it took place. I looked up the area to learn something about Indian Mound, Mississippi. After a bit of research I found that Indian Mound was a fictional town. (correct me if I'm wrong) However, I also learned  that Mississippian culture had been a mound-building Native American civilization from about 800 to 1600AD. Clever.

The roots to the identity of the unknown woman buried on Walker land stretched all the way back to the 1920s and prohibition. The 18th Amendment banned the sale, production, importation, and transportation of intoxicating liquors. Prohibition was supposed to reduce crime but it backfired horribly. Tell people they can't have something and they suddenly develop an insatiable desire for it and will get it any way they can.


With fortunes to be made, bootlegging attracted a huge criminal element and gangsters fought to control local bootlegging activities. Ruthless criminals like Al Capone did not stop at intimidation and murder to maintain dominance in this lucrative business.

As if that weren't bad enough, the KKK broadened its message of hate to include Catholics, Jews, foreigners and bootleggers. Their membership surged upwards to almost 8,000,000.

Bootlegging, gangsters and the KKK invaded the lives of normal law-abiding men and women with disastrous results and the characters in a long time gone were no exception.

The more time I spent in the 1920s, the more attached I became to Adelaide and her story and the more concerned I was that events from this dangerous period had spread their pernicious roots into the present.

When the identity of the woman under cypress tree was revealed I'd either be relieved or despondent. My anxiety kept me turning pages.

If you've enjoyed Kate Morton's, the Secret Keeper and the Forgotten Garden, you will enjoy a long time gone as well. Although a quicker read, a long time gone is a poignant story that will stay with you well after you've said goodbye to the Walker women of Indian Mound, Mississippi. A five star read for sure.
Posted by Linnea at 5:12 PM No comments:

Trials and triumphs of growing grapes in a cold climate


I started testing this variety in our cold climate because I was assured they'd be fine. My husband made a trellis system for me and I planted them at the end of our horse field then surrounded them with some chicken wire. I was concerned the horses might try nibbling on the grape vines but I could have saved myself the trouble. They weren't all that interested.

The grapes didn't do very well. Between pests, and what I later learned was a cold 'well' right where I'd planted them, they were pretty pitiful. So I took some cuttings and started more in the greenhouse. These did very nicely and produced a respectable number of sweet clusters. They really do taste a lot like a Concord grape.

Well, to make a long story short, our house burned down, we rebuilt but just couldn't live there with the bad memories, so moved. The place we moved to had a limited growing area and I didn't bother with any grapes the first year. The next year I couldn't stand it any longer and planted a vine outside (didn't have a greenhouse this time). I protected it a bit and thinned the plant to only 3 clusters as per most grape grower instructions. They were nice and sweet when I sampled them but when I came out a few days later to reap my bounty all the clusters were gone.


We live in a fairly rural area so likely a fox or coyote helped themselves. They were nice and neat about it. The vine wasn't damaged in any way so I guess they just sucked off the grapes. Stinkers.

Before last winter I thought I'd try a light pruning and gave the plant a heavy cover for winter protection. We'll get warm days for a couple of days and then it plunges down as much as 20 degrees the following day - all with no snow cover. I mounded the vine with grass clippings and wood chips as high as I could and then, after attaching the vine pretty solidly to its trellis, I wrapped the unmulched part of the vine in four layers of floating row cover cloth.

Man, did that ever work. I've got over 40 clusters growing on a single, small vine, mostly between 2 and 3 feet off the ground. Now I don't know what to do about thinning the clusters. How far apart should I thin? Ack.

Guess I'll do a bit of reading to make sure I do it right. Knowing that I can easily grow great vines with just a bit of fuss at the end of the year, I'm going to take as many cuttings as I dare and get my vineyard started!

Of course, now the vine will be really attractive to the beastie that ate the grapes last year. I've purchased one of those motion detector sprinklers though, so we'll see how they like a squirt of water in the face when they try to steal them.
Posted by Linnea at 10:37 AM No comments: