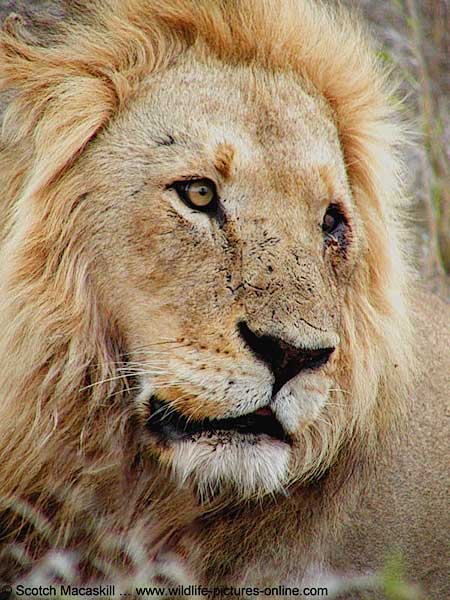 I like finding animals in novels so I wanted to include one in mine. At the beginning I wasn't sure what kind of animal I'd use as there were so many to choose from. The ancient kings collected animals from all over the known world and were also given exotic animals as gifts. But when I came across this picture, I knew I'd found what I wanted.

I love this lion and I wish the soft expression in his eyes evidenced his true nature, but it doesn't. The scars on his nose and the swollen bloody eye tell a much different story - animals fighting for their lives and losing. I wish all lions were like 'Christian', the lion who became so popular on YouTube for how much he loved his owners, even a year after he'd been released into the wild and had become the leader of his own pride.

This guy is going to be my 'Christian'. Well, sort of. In my new novel he represents a lion captured to be the king's pet and chained up in his audience chamber as a token of the king's power. Only one man will tame him and become his friend while he remains a deadly predator to everyone else. The lion will play a prominent role in the novel so I'm hoping this photo can be included in some way on the front cover. I've even made sure I have the photographer's release to use it, so I'm all set.

I plan to open the novel with the lion's capture. It will be what is called in writerly circles, 'the inciting incident', the catalyst that starts the plot moving forward. The capture scene also includes my take on what happened to cause a Babylonian general, historically known as a traitor, to betray the city into the hands of Cyrus the Great.

Has anyone else included animals in their novels? I'd love to hear what they are and what part they play in your story.
Posted by Linnea at 5:05 PM