Do Bears Go Potty in the Woods?

Not all the time.

(photo by SeattleDee at OnTheMove-Cruise News)

Like this bear up a plum tree, we've had bears completely destroy our fruit trees and leave a parting shot below - a pile of bear poop filled with seeds and pits.

I was thinking about bears as I went to sleep the other night. We live in bear country and I'd left a bag of garbage on the deck. Before drifting off to sleep I obsessed a bit about bears coming up onto our deck. So I dreamed about a bear. In my dream I was asleep and woke up to a bear stalking the length of the deck, pressing his face against the windows. My husband thought it was fun to tease the bear by pressing his own face against the bear's from the inside of the window. Believe me, he's like that in real life too so no surprise there. I got bit paranoid. No. Really. I slammed shut the window before the bear could rip through the bug screen and closed the drapes. We went back to bed. In my dream I figured the bear couldn't get into the house, would probably just eat the garbage and leave and I could clean up the mess in the morning. At daybreak I opened the curtains and there was the bear. Face down on the patio table, back paws dangling over the edge, snoring away. What the heck was I going to do now? Didn't know so I woke up.

The dream reminded me of some real bear encounters. There have been many but a few stand out.

A young bear used to come ambling into our back yard out of the forest. One time I was doing dishes and saw him coming so poked my head out of the kitchen window and waved and yelled at him to get back where he belonged. He stopped midstride and looked at me then turned in that ponderous way they have and lumbered into the forest. Just to tick me off and remind me that I couldn't tell him what to do and get away with it he came back in the night and destroyed my crab apple tree. He didn't leave one crab apple and every branch on the tree was broken. 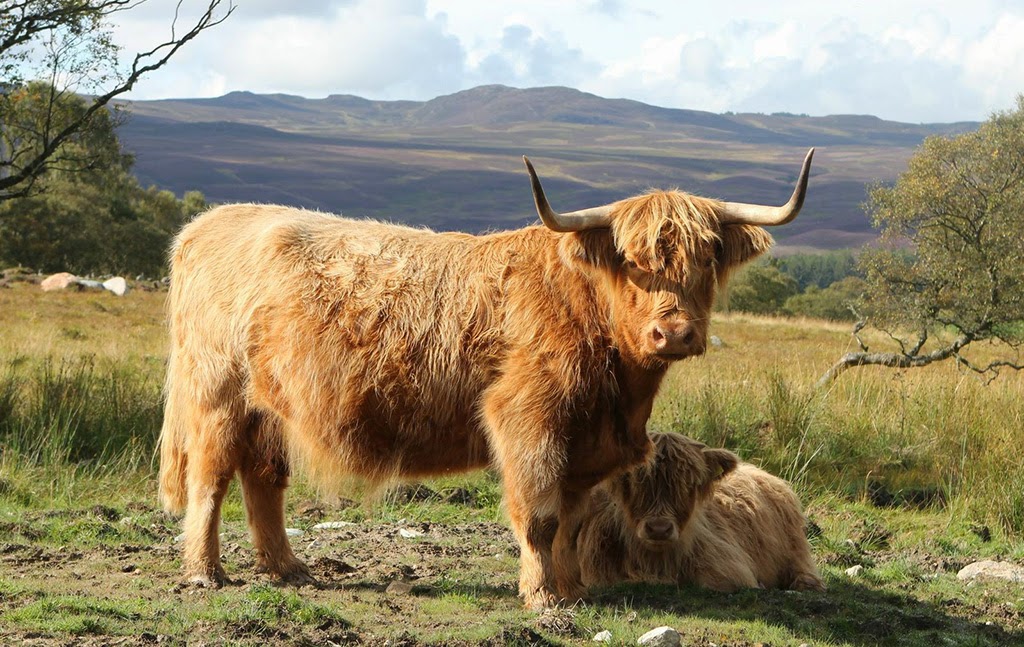 
These are Highland Shorthorn cattle. We had five of the furry guys and they don't care for bears and aren't the least bit afraid of them. One sunny afternoon a bear casually walked across our upper field. When the head honcho, mama cow, saw him she barely paused long enough to snort before charging straight at him. He wasn't moving fast enough so she lowered her head and gave him some encouragement. She didn't stop chasing and he didn't stop running until he was out of the field and into the bush.

Wild bears are not pets and very dangerous. Most of the time. The elderly lady who owned our house before us had developed a lovely perennial garden. One day after working in the garden and in need of a rest, she sat down on the porch beside what she thought was a big dog. She patted it and prodded it a bit because it was blocking her front door and she wanted to go inside. Quite unperturbed it just sat there and wouldn't move.  Still sitting beside the 'dog' she pulled out her cell phone and called her son to come over and move it. The son arrived to find her next to a black bear still scolding it for preventing her from getting into her house. He bought her a bear whistle.
Posted by Linnea at 3:03 PM