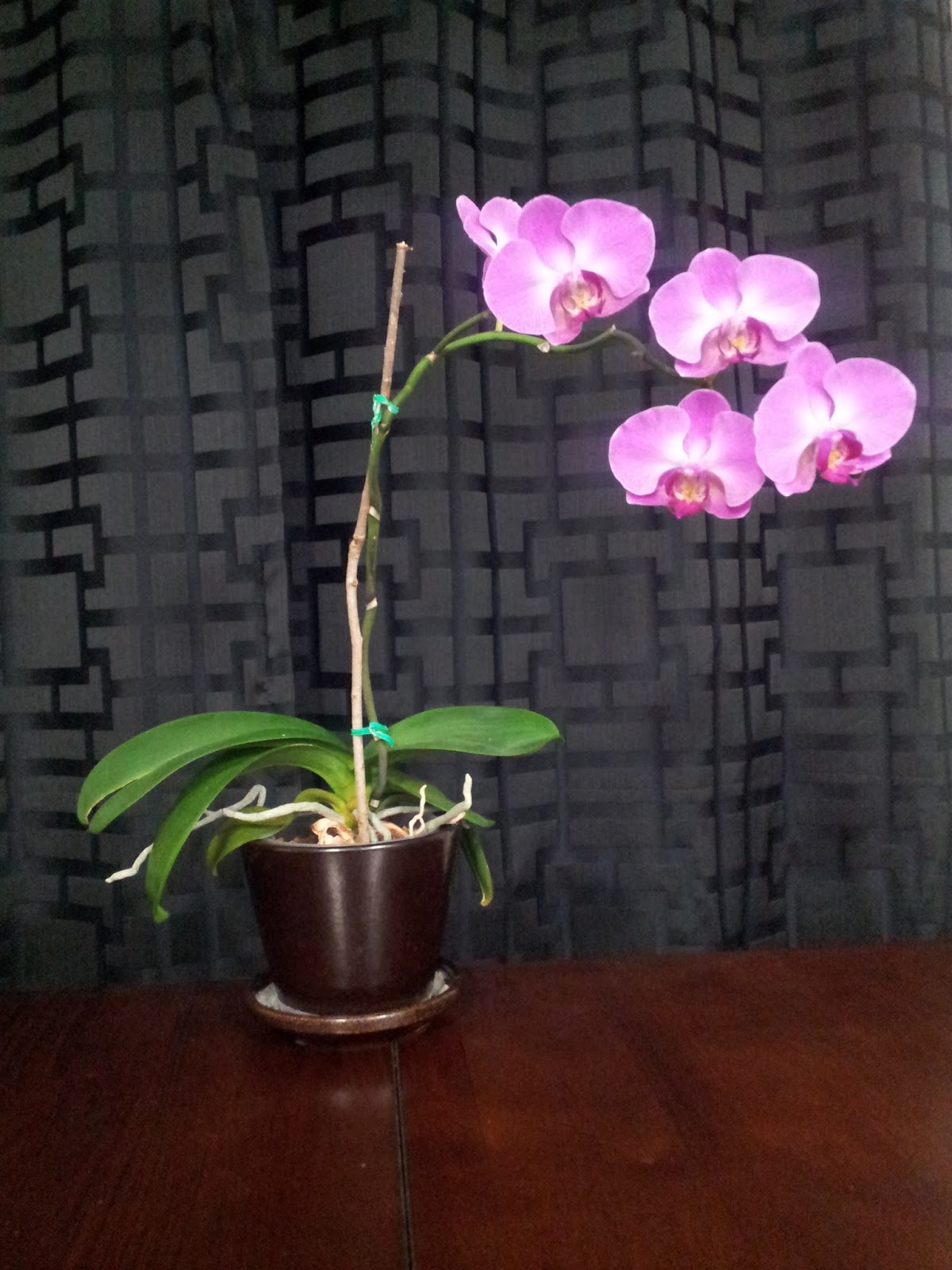 I love orchids. This poor darling has been through the ringer. During the smoke bomb incident I posted about awhile ago, some of the smoke got upstairs. This orchid was in full bloom and the smoke killed the flowers within hours. It was in such a state of shock that it didn't bloom again for several years. I didn't have the heart to throw it out. If a plant is showing any signs of life at all I'll keep nursing it along until it's past all hope. Besides, my son gave this one to me and it was a beauty.

This summer it bloomed for the first time in a long time. I knew it was still active because it continued producing leaves and roots. Every year I'd keep my eyes peeled for any signs of a flower stem but each year I was disappointed - until this year. I'd put it in a west-facing window all last winter then transferred it to an east-facing window this past spring. It has produced blooms all summer, the last bud opening just days ago. I was thrilled so had to post a picture of it. Success at last. My long wait paid off.

Not nearly so much success in my outside garden. We moved to a new property in April of 2012 and at first I was too busy to even think of gardening. Neither had anyone who'd lived here before. No signs of any cultivated plant life whatsoever. It soon became apparent why not. The soil, if you can call it that, was either rocks or clay and it barely grew any grass. Ugh.

I did a bit of reading up on composting ramial wood chips to use as a soil substitute as I have access to a constant supply of chipped deciduous and evergreen branches. Although I didn't have everything I needed to get started I did it anyway but they hadn't rotted enough before I began using them and everything I planted was terribly stunted. The rotting wood chips were using up all the available nitrogen and it wasn't until about three weeks ago that any of the remaining tiny tiny plants began to green up. Before that they were an anemic pale color and so small they couldn't really store enough energy to produce anything. Except for the bush beans. Surprisingly each plant actually grew a few edible beans. A few weeks ago the sole surviving cucumber plant produced four teensy cucumbers. I didn't think much would come of them but when I checked on the plant last Saturday one of the cucumbers had grown to an edible size and was very tasty.

So, I'm encouraged to try again next year. I now have three piles of chips rotting happily away and will leave them to carry on all winter. They've been sitting there since the beginning of spring and should be in good shape to use next planting season. I know there are gardeners who have tremendous success using composted wood chips so I'll keep at it until I get it right. I'm nothing if not tenacious. Dog-with-a-bone my husband calls me.

Note: Useless but interesting bit of information. Once all the blooms were finished on one of my orchid stems I cut it back. The cut end oozed a bit and guess what? It smells like watermelon. Huh!
Posted by Linnea at 8:16 AM