Sorry I haven't posted for awhile but we've been going crazy around here. We're contractors for BC Hydro and some severe storms left about 37,000 homes without power farther north of us. So began a mad scramble to restore their power. The downed lines covered a lot of territory, some of it cross country and only accessible with snowmobiles and snowshoes. 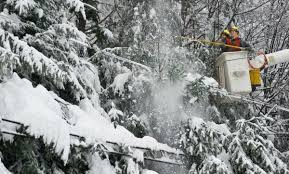 Where possible aerial lift trucks were used to get certified workers close to the power lines so they could use insulated trimmers to cut away broken limbs or snow-pressed branches. Fortunately there were enough trucks up there so we didn't need to take ours. All we had to bring along was our crew and snowmobiles. There were crews from all over the province. Crews put in 16-hour days for as long as necessary and the cost to restore power will be in the millions.

Our crew told us about being out at midnight one night and walking almost an hour up a hill to take down a single huge tree that had fallen across a line. By the time they got up there they realized they couldn't just cut it down but would have to climb it in order to take off some of the top before cutting down the rest of the tree. It's always dangerous climbing a partially downed tree as you can't tell how much damage it's sustained and there's a risk it could snap while you're in it. Also, once you free up the top branches that are now bending way, way over, there's a risk of being boomeranged out of the tree and killed. Thankfully, all went well and they got the tree down without incident.

My part is the paperwork. Ugh. And let me tell you there's a lot of it. Every person and every piece of equipment has to be accounted for every day plus our meal and motel costs. One department wants things accounted for one way and another department another way. Payroll isn't done the normal way either so I had to figure out how they wanted overtime taken care of and recorded. I've been immersed in paper!!!

I'm glad to say that the crisis is now over, power is restored and my emergency paperwork is almost cleared up. Yippee, I can breath again. Well, sort of. Now I have to get back to doing our maintenance audit for the BC Forest Safety Council. It's due in a little over a week and I've lost so much time. Then there's the year-end accounting stuff to take care of and T-4s to send out.....

Sigh. I'm living in this office and haven't written a word on my novel the whole time. It will probably be March before I can begin working on it again. Oh well, fresh eyes and all that.
Posted by Linnea at 3:18 PM