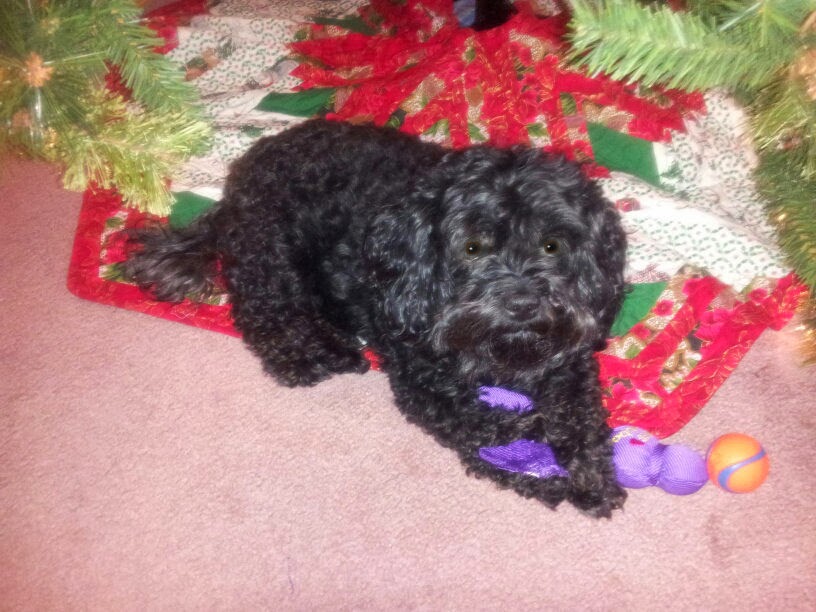 Spencer is a shelter dog. We got him this past May. He was found wandering the streets and in need of urgent veterinary care. The day we went to the shelter to look at dogs he'd just completed a course of antibiotics and was cleared for adoption. They judged his age to be around five years old and his breed is mixed, as you can tell - miniature poodle/cocker spaniel.

Spencer fits into our family perfectly. Introducing him to a harness and leash had him wiggling with excitement so we knew he was used to going for walks. He'd never seen a dog door before but, with some assistance, had it down pat after only a few tries. We weren't sure whether or not he'd ever been to a groomer and the groomer come to our home so we could be on hand in case she got into trouble. He was as good as gold, so another tick mark. He'd obviously been to the groomers.

The longer we had him the more we wondered what had happened to him. He's well-behaved and house trained, likes to go for walks and loves people. We're sure someone misses him. Not that we'd give him up now. We figure he probably got loose when tourists were passing through and they couldn't find him so had to leave without him.

When the Christmas season arrived and we took the tree out of the shed (I have asthma so can't have a real tree), we weren't sure how he'd react to it. Some dogs are petrified at this big thing looming high over their heads, some attack it or bark at it. We put it up, got the lights working and draped the skirt around the bottom, all without incident. Spencer just watched. When it was time to start hanging the decorations we realized that not only was he not the least bit apprehensive, he figured it was his. He grabbed his toys and brought them under the tree, where they stayed until we screwed things up for him by laying presents under it.

Now that the decorations are up and there are presents under the tree, he's careful not to step on the gifts. But he races around just under the edges when he's playing and sets the balls swinging and the lights twinkling and rocking.

Yup, Spencer loves Christmas just as much as we do.
Posted by Linnea at 3:03 PM